And the bidding wars continue!!!  Seems like every listing now is selling with a bidding war.  Great for the sellers but really hard on the buyers.  Buyers are now getting accustomed to losing war after war.  Take a look at our new listing at 170 Cosy Lake Road for example.  It came on the market hitting MLS about 10am Friday morning.  Then the calls, texts and emails started coming as Mama quickly booked showings for that day and the weekend.  Then a bully bid arrived and that’s when all H_ _ _ started breaking lose and Mama quickly started contacting everyone to let them know if they wanted to jump in the time was now.  Very hard on buyers who were booked for the weekend but hadn’t seen it yet.  Bids came in quickly and the seller had very limited time to choose his buyer.  All bids were high, way over asking price.  There were a lot of disappointed people.  The winner is a retired fireman from London, Ontario and his wife who dreamt of living here in the Maritimes.  They had checked out Nova Scotia,  northern and western New Brunswick but it was love at first sight when they walked into this magical property!  Nicholas and I welcome them and their German Shepard, Cooper to New Brunswick.   Cooper plans to swim in the lake at least three times a day and says Nicholas and I are welcome to join him anytime!   Don’t think that I’m not working hard and doing my part for the team.  I was out early yesterday and helped Mama post the SOLD sign and the owner gave me permission to have a nice swim in the lake while Nicholas had a run through the woods.  We can’t wait to meet Cooper and show him all our favourite trails and haunts around the area! 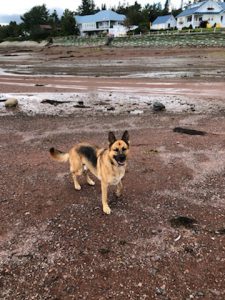 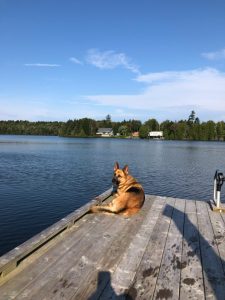 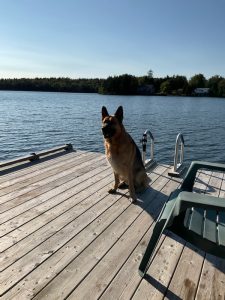 I can tell, Cooper loves the water!

I’m really enjoying the cool nights.  Mama and Papa have been doing a bit of bellyaching saying they know what’s just around the corner!  Being a heavy coated Newf I know what’s coming too and I can’t wait.  The little fella will be pulling out his sweater but I’ll be right in my glory.  Mama says I’m not allowed to mention “The Word” but you all know what I’m talking about!  Ha, ha.

Hope you had a great weekend.  Keep an eye out for me in my red truck and be sure to come over and say hello if you see me.  don’t forget, Election Day is coming up soon so be sure to get out there and execute your right!!!  I would if they allowed four-legged furry friends!