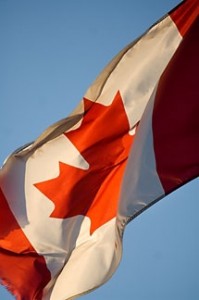 What glorious weather for a Canada Day weekend! I’m hoping to get for a swim (or two or three, or more, ha). Nicholas and I, both have new Canadian flag scarfs, handsome with the red and white against our gleaming black fur. We may sport them at the St. Andrews dog show this weekend. We’ll be in the audience, of course, cheering on our friends! Nicholas says if they have a biggest dog competition I should go in. Is the little guy being smart with me?

Mama’s been working some crazy hours, so she’s hoping to get a couple of days off over the long weekend. But if I know Mama, like I know Mama, is someone wants to buy a house, away she’ll go, on the fly! She very excited to have so much great support staff now with Pam, Steven, Kim and Candace. Our clients are loving them too! Personable, trustworthy, caring and service orientated, just want the doctor ordered! I still feel as Team mascot that I am a very important part of the team. The clients love me too and I love them. I just like to sit beside them while they are talking to Mama while they rub my head (don’t stop rubbing now). Nicholas usually lies next to Mama’s feet (he’s a real Mama’s boy).

The market seems to be on the move because the phones, texts and emails have been red hot and the Team is on the fly! Business is way up over last year through every price range from low, mid-range to high, even though we had such a late spring. I think everyone was so relieved to see the end of all that snow that they just feel rejuvenated in the summer sun and want to move on and celebrate in a new home! Was I the only one happy with all the snow? Nicholas wasn’t impressed and hung near the fireplace with Mama a lot. What about you other big dogs out there? Were we happy or what!

Nicholas and I wish you all a very good Canada Day! We hope you have lots of fun with your families with barbeques, games and fireworks while we all give thanks for this great nation we are fortunate to live in. I can tell you we are two proud Canadian dawgs! Woof, woof!

I have to say that Nicholas and I must have gone to Heaven last Sunday afternoon because if that wasn’t Heaven where we were than Heaven may be more than these two furry dudes can handle!!! We spent 3 hours at 463 Mascarene Road visiting Shelby Armstrong, a sweet 3-year old golden retriever (did I mention female!) and her parents David and Leslie. It was a gorgeous blue sky day and as we drove down the driveway the scenery opened up beyond the trees to this fabulous place on the Passamaquoddy Bay on the Bay of Fundy overlooking St Andrews, Grand Mannan, East Point Maine, Deer Island and more! Mama says it’s one of the prettiest homes on the Bay but all we could see was Shelby coming to greet us and 32.5 acres of woods, lawns, fields, ponds and the Bay of Fundy! The little guy practically flew out of Dad’s truck and his eyes were as big as saucers. I don’t think he even noticed Shelby at first, all he could see was the scenery, No invisible fence, No retractable leashes and we were both F R E E DOGS! He took off flat out around the house and around the lawns (can that guy ever run!) while I headed right to the 17 foot deep swimming pond, Splash, (was that a belly flop?)! I was swimming and swimming, Nicholas was running and Shelby looked at the two of us as if we had just landed from the Moon! She whispered to her mother, “These city dudes don’t get out much do they!” Next thing you know, that’s it, I jump right in the Bay of Fundy! There is something about the salt sea air mixed with the cold salt water that takes me back to my roots. I’m swimming back and forth and back and forth, so refreshing, so nice and cold (the other two wimps didn’t join me)! I hear the grown-ups saying, “Look Buddy’s right in the Bay!” Where else would you think a Newfoundland dog would be? And loving every minute of it too!

We were exhausted when we left there. We slept the entire way home and Mama had to wake us up to get us in the house! We slept most of the next day too, comatose! Heather couldn’t figure out why we were such good, quiet boys, ha! We barely moved, were almost dead! Then Mama always says, “How are the angels doing?” Heather says, “What angels?”

Mama and the Team are going to be back to Charlotte County this Sunday for Open Houses at 4 beautiful Beach Houses on the water! Mama is at 463 Mascarene Road, Steven is at 746 Seeley’s Cove Road (1 km of oceanfront), Pam is at 72 Kaydon Lane in Lake Utopia (fab pristine, warm, fresh-water swimming) and our newest member Candace (she’s a real sweetheart!) is at 133 Green’s Point Road in L’Etete (just past Mascarene) (watch the whales jump right from the beach!). “Buddy wants to see the whales jump, why can’t I go see them jump?” “I could swim out and get a closer look!” Mama says that’s what she’s worried about. The whales in the Bay of Fundy are the largest in the World! Mama says one slap of their tail and Buddy would be toast! Pam put maps on the Open House page of the web site to help people find their way. Nicholas and I are not allowed to go to open houses, no matter how much we whine! We just don’t understand, if we’re running and swimming won’t the people see how much fun can be had at beautiful places like this? With any luck we’ll get back to Charlotte County really soon. Paws crossed and hoping!!! Happy Weekend!

What the heck is going on? Mama’s out showing houses and writing offers like crazy! She says it must be something in the drinking water because everyone wants to write an offer and they want to write it “right now”! The little guy (Nicholas) was whining but I’m good at calming him down. Besides Heather taking good care of us through the day, we’re good company for each other, play hard, rest, run as fast as you can, rest, have a wrestling match, need more rest! Mama says she hasn’t been this busy for about four years and it’s mostly the high-end properties that are the hottest right now. The DuPont Registry predicted that the Baby Boomers would rule in 2014, rewarding themselves for all their hard work by finally upgrading and buying their Dream Homes with cash offers and that’s exactly what’s happening here! Mama has broken a few of her own sales records lately but more on that later!

The Platinum Team has been busy too! (I call them the Dream Team because as team mascot Big Buddy’s part of it too!)We have a new listing at 31 Fox Point in Drury Cove and another on Deerwood with an awesome panoramic water view in Millidgeville.  We are hosting an open house in a nice new construction spec home at 120 Meredith Avenue on Sunday. Steven is as busy as a bee with a new 2-family listing on Westmorland Road, east and a luxury waterfront condo at 21 Upper Deck in Drury Cove where he’s having an open house this Sunday 2-4pm as well. The crowds they’ve been getting at their open houses is wild! Like Mama says, there’s something in the drinking water! Drop by and say “Hello”, they’ll be happy to show you around!

Not sure how but Nicholas lost every single one of his six to eight plus rubber balls right here in the yard last week. The guy is totally obsessed with the game of fetch and he was without a ball since last Monday!  Driving us all ballistic! Thank heavens Mama was able stop at Pet Coral in Quispamsis between appointments yesterday to pick us up a new ball! The girl was so helpful and even though they were closing when Mama arrived she gladly stayed a few moments extra so that Mama could grab that new ball and a few treats for us!  Nicolas can hardly stand it because it’s not just any ball; it’s the RuffDawg XL which bounces like crazy and floats like a boat so we can take it to the beach!!! There is no way Big Buddy Bacon is going to fetch a ball; if you throw it; you’d better plan on going to get it!  If it goes in the water I’ll bring it to the shore but I’m not giving it back. I’d rather run, roll in the grass, chew my new bone or just continue doing my favourite thing; Swim, swim, swim but I’m not fetching a ball! I think the little guy buried the others and has forgotten where! (Maybe I buried a few and have forgotten too). No matter how busy Mama is she always plays fetch with us at least once a day, usually at dusk and if she’s not going flat out, in the early morning as well about 6:30 or 7am. All week we couldn’t even play with our dear friend Everett who usually stops in on his way to Tim’s for a good game of fetch. We love Everett, he plays with us almost every day, buys us great toys, even Nicholas’ all-time favourite ball, the famous Blue Ball was a gift from Everett. It’s the best, rolls fast and bounces high! It’s amazing the way the little guy can jump so high in the air and catch that ball before it even hits the ground!  Super duck live! Easy to see the Border Collie in him.  As a pup Nicholas played a lot with the athlete of athletes “Thunder”, a pure bred Scottish variety of Border Collie. Nobody but nobody runs jumps or fetches like Thunder. No doubt about it Nicholas was taught by the best! And Thunder was so kind that he’d catch the ball and pass it to young Nicholas to fetch back (not many boys would do that)! I take a different approach, keep cool and play the out-field! When Nicholas misses it, I just open my big mouth and plop the ball falls right in. (Chuckle, chuckle), no running, no panting, no effort, just plop, I’ve got the famous Blue Ball with very little effort! And that folks is the way it’s done. Nicholas you’re going on the watch and learn program with Big Buddy Bacon!