Can you believe that it’s a week today since Hurricane Arthur! Nicholas and I weathered the storm, no pun intended! Let me tell you that this Big Buddy Bacon was terrified of the high winds! I got up Saturday morning, Mama opened the door to let me out, and I took one look at the sheets of raining sailing by and went back in the house! Good grief! Who’d expect a guy to go out in that??? Not me and Nicholas! I don’t mind rain at all, I actually quite enjoy it but that wind howling; it was just too much for Buddy! The only way I was going out was with Mama (and Daddy too) all bundled up and standing near me on the side lawn with protection from the 17’ cedar hedge while I did my business (as Mama politely calls it)! Enough to give a guy the big one! Let me tell you Nicholas and I were not wasting any time getting back in the house. Then we lost our power! Oh boy! Mama kept saying “At least we’re not cold”. Cold is not what I worry about, it’s the heat and lack of air conditioning that makes me worry. Then that night it cooled right off, yeah! Mama and Daddy got out the candles and Daddy taught Mama how to play poker by candlelight. Seems that Mama caught right on (she’s pretty lucky with a bit of Irish on both sides of her family) because she seemed to be doing really well and Daddy was doing a lot of moaning! When we got up Sunday morning our beautiful big Linden tree was laying on the roof on the garden shed. Mama was not a happy camper. Duncan from Brunswick Nurseries (Mama says he’s the tree expert) came right over to check it out and he’s getting it cleaned up for us.

The week has flown by and our friend Everett has dropped by twice a day to play ball with us on his way for his coffee run at Tim’s. I just love Everett!!! When he heads in the yard I go to the edge of the Invisible Fence and just start bouncing up and down! Nicholas loves him too but he is more fixated on the ball, I think that guy would chase that ball til he drops! Everett often says, “I think you’ve had enough Nicholas, time to take a little rest now.”

Can you believe that Mama went out Saturday and showed a waterfront house in that storm? It was a hot property and the buyer told Mama they are not made of sugar and Mama said, “Neither am I! Nicholas and I were at the door saying, “Be careful Mama, don’t get washed into the Kennebecasis!” She took Daddy’s big heavy truck to be safe and she told him the wind was actually lifting it when she stopped at the stop signs. She sold that house and she says the property is absolutely gorgeous with a nice beach. Beach, beach, did someone mention a beach? That’s Buddy’s favourite word!

Steven, Kim Burt and Candace have all been very busy this week!!! Kim has been negotiating an offer on an executive property; Candace has an accepted offer on a nice property and Steven listed an executive home in Rothesay. Nicholas and I say “Go Team Platinum Go!”

We did get to meet Molly Burt and her baby sister Abigail thisweek, here in our yard, it was sooooo exciting. That Molly is a hot tomalley, brown chocolate lab, perfect friend for Nicholas. Baby Abigail is a golden lab only 8 weeks old. Kim held her in her arms while I had a closer look. Abigail was scared of me (probably my big size) so her Mama put her in the car where she felt safe. She was awfully cute, let me tell ya! Don’t think Mama could carry me around like that at 8 weeks!!! Nicolas says her knees would have buckled! That’s enough from the Peanut Gallery! 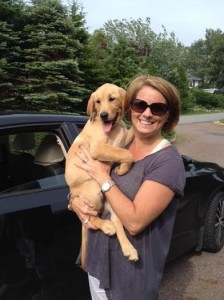 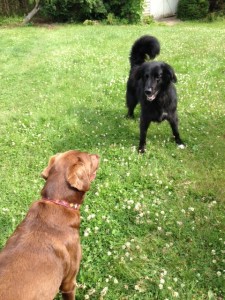