I said “I love snow” but this is getting ridiculous!!!  When the drifts are much higher than Mama’s head and we can’t see when we pull out of our driveway Big Buddy Bacon says “Enough is enough!”  At first I thought it was fun but as they say, “Be careful what you wish for!”  Then it kept snowing and snowing and coming down and coming down with no break in sight.  The drifts are getting higher and higher and I feel like I’m in a tunnel when I play in my driveway.  It’s got to end soon!

I woke up to a blue sky this morning and barley recognized it.  Oh yeah… that’s what it looks like, blue like Daddy’s eyes.  My crazy little brother Nicholas doesn’t seem to mind he dives through the drifts like a gazelle!  Digs huge holes burying himself out of sight and they bam, up he flies out of the hole like a torpedo and takes off across the snow again!  I have to be careful to stay out of his way.  I made a huge mistake on the last big storm.  Nicholas went up our front walk and then down over the bank beside the house, I followed him.  Then he did a big dive into a drift and I did the same.  Just one problem, Buddy Bacon flies like a cement truck!!!  I flew through the air and then poof, I went down and down and down into the soft drift.  The snow was all around me and I couldn’t get out.  Nicholas was laughing and jumping all around me, teasing me like crazy and there was nothing I could do.  The more I tried to move my legs the deeper into the drift I went.  Thank Heavens that Daddy was out back filling the bird feeders and saw it happen.  He came over to help me out but I’m 165 pounds he couldn’t budge me!  He had a really worried look on his face!  What are we going to do???  I had to do something and I had to act quickly so I rolled onto my back and rolled right down out of that drift!  Daddy said he couldn’t believe how smart I am!  Nicholas thought it was hilarious and I learned a very valuable lesson, Big Buddy Bacon flies like an elephant and needs to stay out of the drifts!  Mama takes us for walks where it is either ploughed or a trail is beat down.  Good walking for her, good walking for me.  And Nicholas can dive into any drifts he wants but he’ll be doing it alone from here on!

The Team has been super busy even with all this snow with accepted offers on two of our high-end houses, one in Rothesay and one in Charlotte Country!  Mama’s been negotiating like crazy!  Right in the middle of January and the biggest storms in decades!  Steven’s been working on four accepted deals and Kim has been busy with several serious buyers, finding them the perfect home.  Can you imagine that Kim had 30 people at her open house last weekend at 43 Bel-Air Ave in Rothesay.  The storms are not holding this Team down.  Nicholas and I are doing are part too, delivering our Buddy Biscuits to furry friends and keeping up our blog and public relations!  Stay warm, stay dry, stay safe and stay out of those drifts! 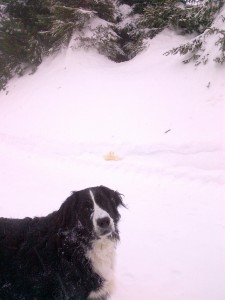 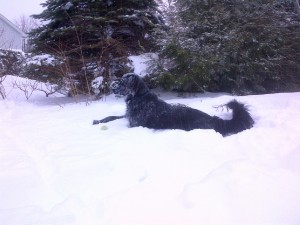 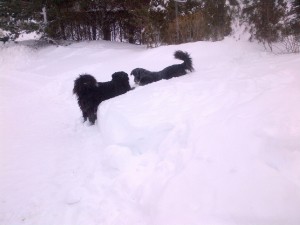