Well our tree is trimmed, the gifts are wrapped and Nicholas and I are all ready for the big fella in the red suit to visit our house on Christmas Eve!  We’ve been trying sooo very hard to be good as Mama says there are Elves watching us at all times now.  Where the heck are they?  We’ve been snooping all around the house trying to pick up a scent and we can’t find any sign of an elf!  We’ve looked under the bed, behind the drapes, in the basement, under the sofas and everywhere but where is this elf?  Mama says he’s quick and hard to see but Nicholas and I say he must be one sneaky little snooping streak of lighting because he has us totally buffaloed!  I never thought anyone could be quicker than Nicholas and I’ve got the nose for scents in the family and  I’m picking up nothing.  I can pick up a squirrel scent from halfway across the golf course but I’ve got no reading on this elf!  I want to know what kind of a dude goes snooping around your house watching for a guy to slip up and then report back to Santa?  Who would take such a sneaky job?  Nicholas is about as impressed as I am but let me tell you we are being very, very good boys lately!  Oh ya!   Nicholas has been a bit calmer and not flying up and down the staircase like a banshee every morning.   We haven’t ripped apart Daddy’s socks with a tug of war in at least two weeks (this is usually a daily entertainment, ha).  Mama says he’s not going to have any socks left, guess he’d have to go bare foot like us.  Mama says I have four white natural socks with the white fur on all my feet.  I’m quite proud of it actually and keep them spotlessly clean.  I think a fella looks good with four gleaming white paws.  Nicholas doesn’t have white socks but Mama says he has a pretty face.  He may have a pretty face but I’ll tell you my bro is no sissy.  He’s as tough as nails, strong and wiry.  When we play tug of war he can even drag the Big Budster across the room and that’s not easy.

Mama says we may have a green Christmas!  What???  No snow for Buddy Bacon!  Give me strength!  It’s wintertime, I’ve been waiting all year for fun in the white stuff, where is it?  Mama tells me to stop this as she said we got enough snow last winter to last for years but I’m built for snow and I just love it.  It’s cold, wet, fluffy and a whole lot of fun to run, jump and roll in.  She says it will come at some point, just like last year and then it wouldn’t stop!

The Team are still busy showing houses to qualified buyers, even Christmas week!  When people need a house it can happen anytime, even this time of year.  The Team and our sellers are taking a break from open houses of course over the holidays to be with family and friends but they will start up again in the New Year and I’ll be announcing them as they go.  We have some fun things planned for the new year so stay posted.

I would like to say a special thank you to Thandi’s Restaurant (Mama’s favourite) for sending Nicholas and I home a doggy bag from the Prudential Christmas Party!  We both had our noses out of joint that we couldn’t attend.  We stayed home with long faces and then surprise, surprise Mama brings us home a yummy doggy bag, sooo good!  Then we had our own Christmas party here at our place this week and Pam, Steven, Stephanie and Jody gave us the nicest Christmas presents with lots of special treats.  We even each got the new long lasting Milk-Bone® large dog Chewlotta™.  Smile!

Nicholas and I wish a very Merry Christmas to you and to all your four legged friends and all the Best In 2016!  Happy New Year too! 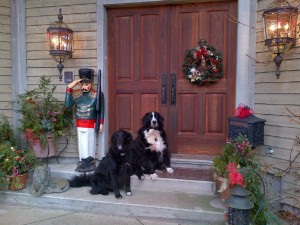