I’ve seen it all now!  Last Sunday I was with Nicholas, Mama and Papa at the Gull & Herring at New River Beach and low and behold this little Shiatsu came rolling up on the front of a bicycle!  Not a word of a lie.  He had a special seat attached to the front of the bike and he was rolling along in front of his Papa.  His family pulled up next to us at our picnic table and I’m sure all our jaws dropped!  There in bold writing on the side of his special seat was the name of the manufacturer and what do you think it’s called?  The “Buddyrider”.  Really, it really is, the Buddyrider.  I laughed to kill myself, was practically rolling around on the grass and you know Mama, she talks with everyone (they didn’t nickname her in school Chatty Cathy (after the first talking doll) for nothing so she started asking them all about this Buddyrider.  Apparently it’s Canadian made in BC and was featured on “Dragon’s Den”.  It’s now sold across Canada and the United States plus several other countries.  Coolest thing I’ve seen for my little four-legged friends in a long time.  Way to go!  We just stood and stared as they pull out on their way with the little fellow looking back at us, his ears blowing in the wind and I swear there was a smile on his face!  See the pic below.  It’s both fun and safe.  Check it out at www.buddyrider.ca. 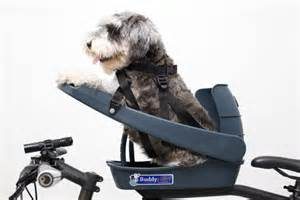 So I turn and say to Papa, “Good luck finding a Buddyrider big enough for the Budster!”  Then Mama stated teasing him saying maybe we could buy a two-wheeled cart big enough for the Bud that Papa could haul behind a bike but Papa said no way, he isn’t strong enough to drag a 170 pounds dog in a cart behind a bicycle.  Of course Nicholas wouldn’t need any cart as I don’t think you could drive a bike far enough or fast enough to tire that guy out as he’d run alongside wide open, having a ball!

I want to know what the heck is going on when Jack McCairns (pic below) gets to attend an agent’s open house this past Tuesday at 90 Javin Hill with his Papa Jody McCairns and I’ve never been allowed near an agents open house???  What makes him so special?  Just because he’s cute, personable and small I don’t except double standards in the company.  If Nicholas and I hear Mama say one more time how sweet and precious Jack McCairns is I think we’ll both be sick!!!  I was pea green when I found out he attended and they were serving Mexican chicken taquitos to the agents too!  I didn’t even get a whiff (not that I’d be allowed to have one on Dr Kelley’s strict orders but still, it’s just not fair, not fair at all and my nose is definitely out of joint, as Nicholas would say!  I better not hear that Jack McCairns was wolfing down taquitos; I think it would be more than I could take!  I must say that Jack has a very good Papa in Jody who absolutely loves all four legged friends every bit as much as Mama does.  Mama is trying to figure out who is more spoiled us boys or Jack.  We say Jack takes the cake now as he’s the one that got to attend the open house, not us!  Ha ha.

Steven’s at it again with open houses for the public this coming weekend.  You just can’t keep a good man down!  Saturday he’s at a hot property at 233 Montreal Avenue on the West Side from 11am – 1pm which is a fantastic value, beautifully staged and getting lots of attention.  Then from 2pm – 4pm the same day his at 467 Clearview Road West which has water views of the harbour.  Drop by and say hello and have a great weekend!