Breaking news!  Bank of Canada rates are up!  BoC just raised its prime lending rate another .25% bring the rate to 1.25%, the third hike in six months.  What does this mean to you?  Mama says the increase will affect floating-rate loans, variable-rate mortgages and lines of credit immediately.  It should also be sending a message that if you’re thinking of buying a house and taking out a mortgage now is the time.  We all know the rates will continue to go up but they are still at historic lows compared to what home owners faced in the 80s at 20%!!!  So the longer you lock in your term at a guaranteed rate the better.  You can still get a 5-year term for 2.94% and a 10-year locked in at 3.74.  These long terms take away a lot of question marks and stress knowing your exact payment over the long term and Mama highly recommends it!

Well we finally got our little Christmas tree down last week with a lot of hoop-la out of Nicholas.  The little guy sure loved his tree and I think he’d keep it up all winter if he could.  Papa finally said enough is enough your tree is coming down today.  Nicholas got us to take his pic with it before we took it down.  By the way Christmas Day was Nicholas 6th Birthday!  Named after St. Nicholas but this little guy is no saint! 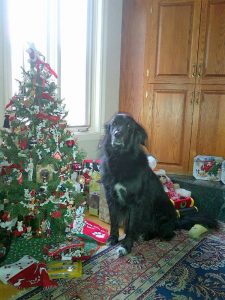 I want to introduce you to our little cousin Stella Marie, Mama’s brother Tom’s new cat that he rescued in from the cold almost a year ago last February.   Do you remember the terrible storms we had last February?  Stella was one year old and out in all that bad weather.  She was quite wild and he couldn’t catch her for two weeks but kept leaving food out which she would take.  Finally the temperatures dropped so low she could hardly move and he was able to rescue her.  First she was taken to the vet who verified she has about one year old.  Then she got all her shots and the next step was to post notices everywhere around the neighbourhood and social media to find out who lost a cat.  No one claimed her so our Uncle Tom now had his very first cat!  Then it was on to the pet store for food, treats, toys, bed, litter box and cat condo!  Stella loves her condo.   Tom had owned several dogs but never owned a cat in his life so there was several calls to Mama, “What do I do with this… that….?”  Stella Marie will soon be two and below is her Christmas photo with the Grinch.  Her first Christmas with our Uncle Tom.  What a beautiful girl she turned out to be!  Welcome to the family Stella! 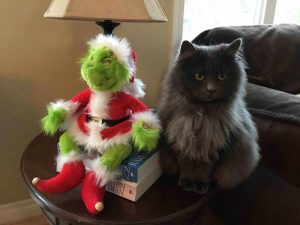 Next weekend January 27th and 28th Mama and Charlie are hosting 6 open houses from the west side of Saint John to Rothesay.  Watch for details.

Hope you’ve been bundled up and making the best of a rough winter so far!  My heavy Newfie coat is sure coming in handy as I walk the trails of Allison and Spyglass.  Hope to see you soon.